Death incidents inside Egyptian places of detention during the period between 30 June 2013 and 1 December 2019.

On the occasion of the International Human Rights Day, Committee for Justice(CFJ) has chosen to shed the light on the ongoing human rights violations taking place inside Egyptian places of detention, which have led to hundreds of deaths in the past few years, making such detention centers more of death centers, rather than law enforcement centers.

Few days prior to the 34th session of the Universal Periodic Review(UPR) Working Group, which included the UPR of Egypt, and following the release of a report by UN experts on the situation of prisons in Egypt, which highlighted that “negligence and poor detention conditions have put the lives of thousands of prisoners at great risk”, the Egyptian government organized an inspection tour for Tora Prisons Complex, which contains seven prisons, the most famous of which are Al-Mazraa(farm) Prison and High-security prison known as Al-Aqrab(Scorpion) Prison.

Many -State supporting- rights defenders and media representatives participated in that visit where they witnessed the -supposedly- extravagant and luxurious life that Egyptian prisoners enjoy under the patronage of the Ministry of Interior. On 11 November, State-owned ‘Al-Ahram News Agency’ published photos of high-quality food and barbecue parties held for prisoners.

CFJ noted that during and after that orchestrated visit, the Prisons Service had deprived the political prisoners from their basic legal rights as the right exercise and the right to visits. In addition, none of the visit participants met or listened to the testimonies of political prisoners regarding their detention conditions, except for two prominent figures, Hazem Abdelazim and Safwat Abdelghany, whom CFJ believes their testimonies were recorded under pressure.

Amid the Egyptian authorities’ claims regarding places of detention, and on the other hand, previous statements made by the President of the National Council for Human Rights for Al-Shorouk newspaper last July, where he stated that “some prisons are not accessible for us to visit and we do not know what is happening inside them”,

CFJ presents in its report “With No Accountability” precise data and figures, which its team has worked on collecting and analyzing, with the aim of providing the local and international community with a clear picture of the reality of the situation inside Egyptian places of detention. It is worth noting that the mentioned cases and the numbers listed in the report reflect only the data which CFJ’s research team was able to obtain and verify, and it certainly does not show the full figures.

Perhaps the name of the report “With No Accountability” comes to demonstrate the humanitarian catastrophe that takes place inside the Egyptian detention facilities under the auspices of the Ministry of the Interior and the Egyptian Armed Forces and, with the direct complicity of the highest executive authority in the Country. Such complicity is clearly manifested through the absence of any form of accountability, as well as the provision of a secure environment for the perpetrators of such crimes to escape from accountability.

In that regard, the report showcases the suffering experienced by prisoners and detainees inside places of detention in Egypt, through various violations committed, including crimes of torture, ill-treatment, denial of medical care, among other causes which have led to the death of 958 detainees, including 9 minors, during the period between 30 June 2013 and 1 December 2019, according to the data monitored and documented by CFJ’s researchers.

“the insufficiency of Egyptian laws and legislations that deal with the phenomenon of death in places of detention, and their inconsistency with international standards, in addition to the absence of deterring laws and the legalization of impunity contributed greatly to the spread of such a phenomenon. This comes in a time where there is an absence of a true will and vision from the Egyptian government to improve the conditions inside places of detention.”
Ahmed Mefreh, the Executive Director of CFJ

The era of Egyptian President Abdel Fattah El-Sisi, which began in 2014, witnessed the larger number of deaths inside places of detention with 84.34% of cases covered, amounting to 808 death incidents, while that of Adli Mansour, the President of the transitional period was 15.66%, with 150 death incidents.

Type of violation leading to death 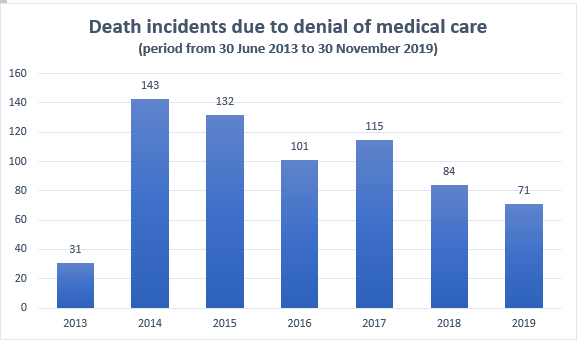 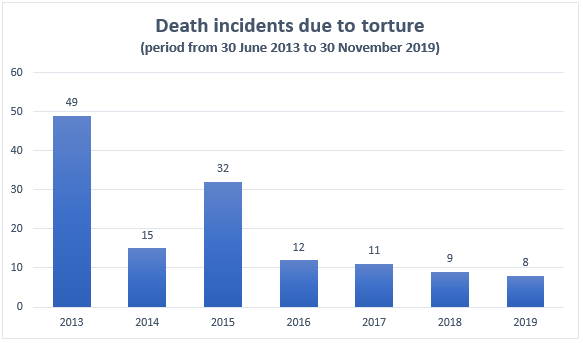 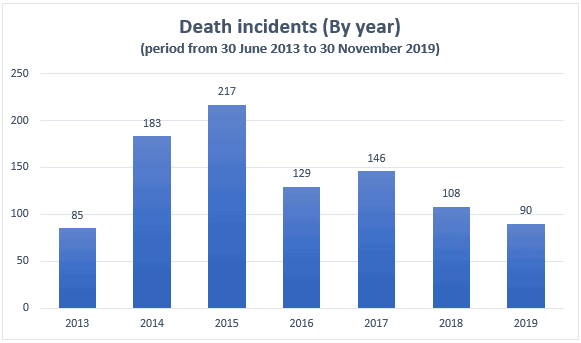 CFJ calls on the Egyptian authorities to truly work on improving the conditions of places of detention in Egypt, and to immediately open impartial and effective investigations into the deaths that occurred inside places of detention. This should come in parallel with working to prevent similar incidents in the future and to ensure the safety and security of detainees, and while adhering to the Egyptian constitution and provisions of law It provides for the protection of the right to life as a fundamental right that mustn’t be violated, which is consistent with Egypt’s international treaty obligations.

CFJ also calls on the Egyptian authorities to immediately stop targeting independent civil society, and to engage in a real community dialogue that includes independent civil society organizations; in order to work on reforming and rehabilitating Egyptian detention facilities. Finally, we reaffirm our previous calls for halting the use of arbitrary arrests and pre-trial detention as a tool for punishing political opposition and activists.

Samples of key information and statistics included in the report: 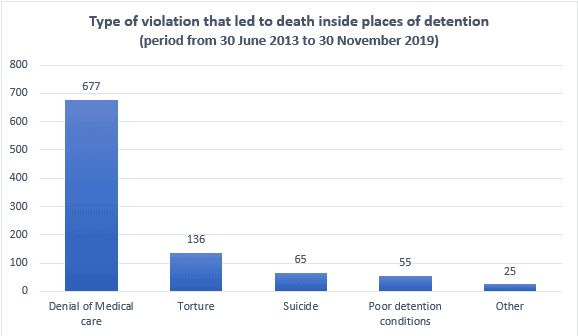