The Giulio Regenis of Egypt: Deaths in custody in Egypt since 2013

Press release: by Committee for Justice

The Committee for Justice (CFJ) said on Thursday that it has documented a remarkable increase in the number of deaths in detention centers in Egypt in 2020, compared to a relative decline in 2019.

A report by CFJ, released today, tracks deaths inside Egyptian prisons, official and unofficial detention centers, since 2013, with a special focus on deaths that occurred from January to October 2020.

The report, titled, The Giulio Regenis of Egypt Since 2013, refers to the Italian student and researcher whose body was found in Cairo on February 3, 2016, with signs of torture, amid mutual accusations between Italy and Egypt indicating the involvement of Egyptian security services in killing him as a result of his torture.

Regarding the report, the Executive Director of CFJ Ahmed Mefreh, said: “Regeni was not the only victim of Egyptian authorities. After him came the French citizen Eric Lange, the American James Henry Lawne , and others who were killed in cold blood, and without accountability for their killers and torturers so far, amid suspicious international silence, and an urgent call to press for investigations into the deaths of foreigners and Egyptians inside detention centers in Egypt.”

The report stated that by analyzing the causes of death over those years, it becomes clear that deaths were mainly by denial of health care since the military’s takeover of government in 2013, while the number of deaths due to torture fluctuated, and 2013 is the worst year by all standards, within only six months (June-December 2013), 85 deaths occurred at the hands of the detention authorities, 57 percent (49/85) were due to brutal torture, and 36 percent (31/85) were due to the denial of health care. 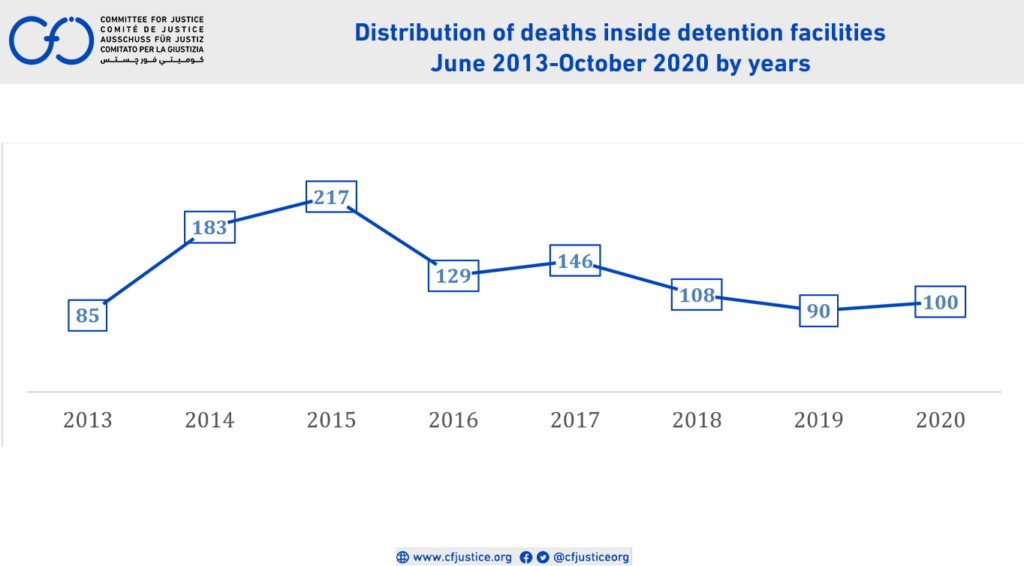 In general, the incidence of deaths due to denial of health care reached 71.9 percent (761/1058) of the total deaths in detention facilities during the reporting period, followed by deaths due to torture, which amounted to 13.6 percent (144/1058), then deaths due to poor conditions of detention 4 2.7 percent (29/1058).

The report noted that the number of deaths was highest in the governorates of Cairo, Minya and Giza, with 236, 104, and 100 deaths, respectively, the three of which represented 41.5 percent (440/1058) of the total deaths in detention facilities during the reporting period,  due to the proliferation of public prison areas and the high number of police stations in those governorates. 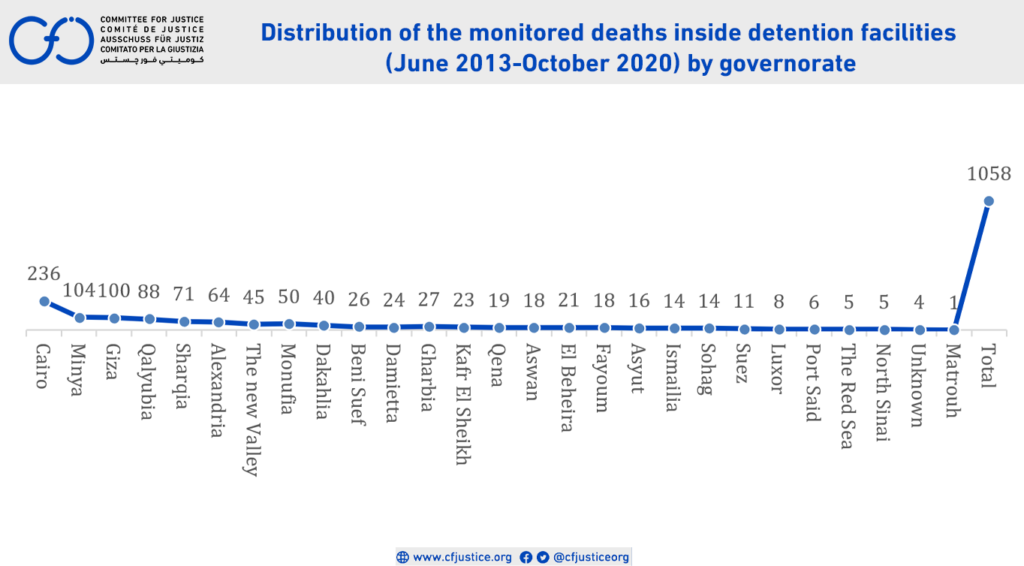 The report analyzed the facts of death according to the types of detention facilities, noting that the number of deaths in police stations and headquarters was the highest by 55 percent (584/1058), followed by central and general prisons by 33.9 percent (359/1058), with an increase in the number of deaths among detainees and prisoners inside deportation vehicles, Central Security Forces camps and court headquarters, with 43, 20, and 16 deaths, respectively, as follows: 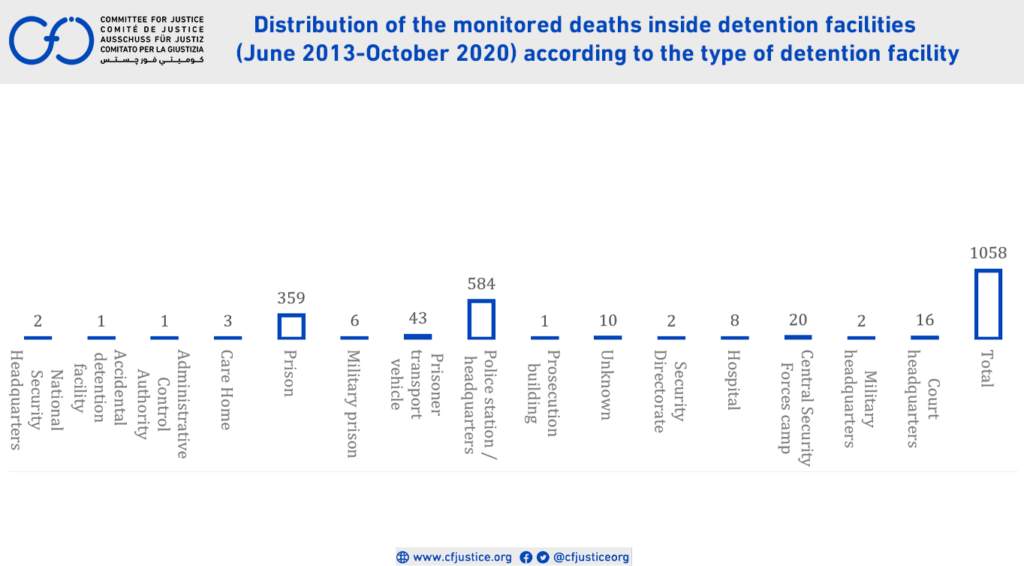 As for the year 2020, which witnessed a significant increase in the number of deaths in detention facilities in Egypt, this was due to the policies followed by the Egyptian Ministries of Health and Interior in dealing with the pandemic, as the number of deaths due to the virus reached 17 cases. That is due to the Ministry of Interior’s use of emergency situations – in politicy, behavior and practice – to abuse citizens, while the Ministry of Health is negligent and health facilities inside the detention facilities are unable to treat them.

CFJ monitored 100 deaths in detention facilities, with the highest deaths in June (15), September (14), and the months of May and July (12 deaths each), representing 53 percent of the total deaths during the reporting period.

According to the report, the geographical distribution of these deaths was as follows: The number of deaths recorded in Cairo reached only 46 percent (46/100) of the total monitored cases, and Al Sharqiya came next at 16 percent (16/100), then Menoufia and Alexandria Giza, with 10, 7, and 7 deaths inside detention facilities, respectively.

The report classified the types of detention facilities in which death cases were monitored and documented, with central and public prisons ranking first with 52 percent (52/100) of deaths, followed by police departments and stations with 41 percent (41/100).

The report also classified the death cases according to the type of accusations and the cases on which the deceased were listed, as the number of deaths among prisoners and detainees in connection with cases of a political nature increased to 68 deaths, which is more than double the deaths among those listed in cases of a criminal nature (32 deaths). In addition, deaths due to lack of health care were distributed among 55 deaths in the first (political) section, compared to 29 deaths for the same cause in the second section (criminal).

The analysis of the data according to the report, according to the age groups of the victims and the causes of death in their places of detention, indicated that 52 percent of the deaths (52/100) occurred due to the denial of health care for victims whose ages ranged between the two categories of the elderly (15 deaths) and middle-aged (47 deaths). The ratio between deaths in those two categories – for this reason – indicates the failure of the detention authorities to take care of the elderly on the one hand, and their abuse of middle-aged people in particular and deliberately denying them health care – despite their responsibilities under local and international law – which led to their death at this rate. 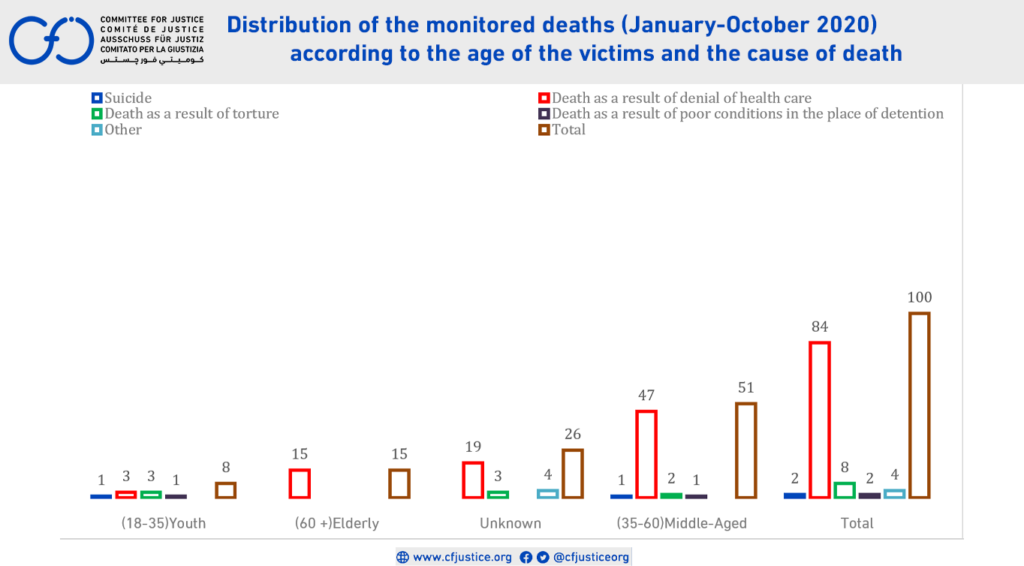 In the conclusion of its report, the CFJ called on the Egyptian authorities to ratify the International Convention for the Protection of All Persons from Enforced Disappearance, to activate the constitutional texts that criminalize torture crimes, to arrest the officers, officials, and supervisors of torture and enforced disappearances, and to hold them accountable.

It also recommended amending articles of some laws that allow violations of detainees’ rights, such as Articles 40 and 41 of Law No. 94 of 2015, abolishing Article 143 / last paragraph of the Code of Criminal Procedure, and amending Prisons Authority Law 396/1956 to allow the National Council for Human Rights to visit prisoners and to allow detention by notification to the Public Prosecutor, and not based on prior authorization from him.

The organization also called for increasing the number of doctors assigned to work inside central and public prisons in proportion to the numbers of detainees and prisoners, reducing overcrowding inside detention centers, providing sufficient numbers of isolation rooms during health emergencies, and holding officials accountable in the Tora Prisons Complex – and other detention centers in which cases of Covid-19 have emerged – for their responsibility to cleanse the rooms in which these cases appeared, isolate those in contact with them in quarantine, and track their health status.

CFJ stressed the need to oblige the Egyptian Ministry of Interior and the detention authorities to apply Article 38 of the Prisons Organization Law regarding correspondence between detainees/prisoners and their families, and to cease collective punishment practices, and the arbitrary use of disciplinary tools and means to abuse prisoners/detainees or/and their families by depriving them of communication, through alienation decisions, banning from visits, and prolonged solitary confinement.

It also recommended applying the rules of separating detainees and prisoners and classifying them according to their categorization inside the headquarters, allowing two hours of exercise – morning and evening -, providing living supplies, personal and general hygiene and food and drink supplies/tools according to safety and security standards, providing appropriate food for the state of health, and developing and applying mechanisms to hold prison doctors accountable for their failure in monitoring the access of sick prisoners/detainees to adequate food, which is their responsibility under the provisions of the internal regulations for organizing prisons, as well as activating the provisions for the health-based release of detainees/prisoners suffering from diseases that threaten their lives or threaten them with total disability as stipulated in Article 36 of the Prisons Organization Law 396/1956.

Egypt: Rights groups hold the authorities accountable for the life of Coptic activist Ramy Kamel, marking the one-year anniversary of his imprisonment in reprisal for human rights advocacy and cooperation with the United Nations Egypt treats detainees as hostages, uses them to bargain with Biden’s administration, says rights group director