The Committee for Justice (CFJ) has launched the second version of its periodical reports as part of its Detention Watch project, with the aim of mobilizing efforts of human rights defenders, lawmakers, and international stakeholders, as well as the Egyptian government, towards dealing with political situations outside prisons and detention centres, in a manner that increases the effectiveness of their actions in correcting conditions inside these facilities.

The new report, titled “The State of Exception”, monitors violations in prisons and detention centres in Egypt from January to March 2021. Egypt seems to be inspired by Carl Schmidt’s “state of exception” concept, which referred to the State’s use of its sovereign power to violate the law under the pretext of protecting or achieving the “public good”.

CFJ said in its report that the first quarter of 2021 witnessed one of the Egyptian regime’s most significant attacks on human rights activism. First, it has legalized the arbitrary measures obstructing the organization of the work of civil society groups through the issuing of new implementing regulations for the Associations Law, in a move aimed at eradicating civil society work from Egypt’s political scene. This was followed by testimonies of many incarcerated human rights defenders, who reported being subjected to torture in custody, including Solafa Magdy, or mistreatment and poor detention conditions, like Marwa Arafa. Meanwhile, Islam Orabi announced a full hunger strike to protest his enforced disappearance for the second time, and the renewed detention of many other human rights activists and political figures such as Abdel Monem Aboul Fotouh, Patrick George Zaki, Alaa Abdel Fattah and Mohamed Al-Baqer.

CFJ’s report also monitored the spread of Covid-19 infections inside the New Damietta police station last January, where ten detainees tested positive as a result of coming into contact with one patient.

The Egyptian authorities also started the new year (2021) by carrying out the death penalty against at least seven prisoners, while death sentences were handed during the first two months (January and February) against 67 defendants, and cases of 48 defendants were transferred to the Mufti for his non-binding opinion in preparation for their execution. The first quarter of 2021 has also witnessed the systematization of enforced disappearance from inside detention centres and the “recycling of cases” of victims in new fabricated cases.

Examples in the reporting period include the renewed detention of lawyer Islam Ahmad Salama on January 16, 2021, after the Criminal Court issued a ruling to release him on EGP 2,000 bail, but his family was surprised to learn that he disappeared again from inside his detention place.

According to the report, during the first quarter (January-March) of 2021, the Committee for Justice (CFJ) monitored 1962 violations, topped by violations related to the arbitrary deprivation of liberty – at about 59 percent (1166/1962), followed by enforced disappearance and poor detention conditions at approximately 17 percent each (336 and 335 violations respectively). Meanwhile, torture incidents amounted to 5.5 percent of total violations (108/1962), while deaths inside places of detention accounted for 0.9 percent (18/1962).

In the same period, our team was able to document 283 violations, including poor detention conditions by 41.6 percent (118/283), followed by arbitrary deprivation of liberty and enforced disappearance by 19.7 percent each (56/283), torture by 18 per cent (52 violations), and one documented death incident inside detention places during the reporting period. 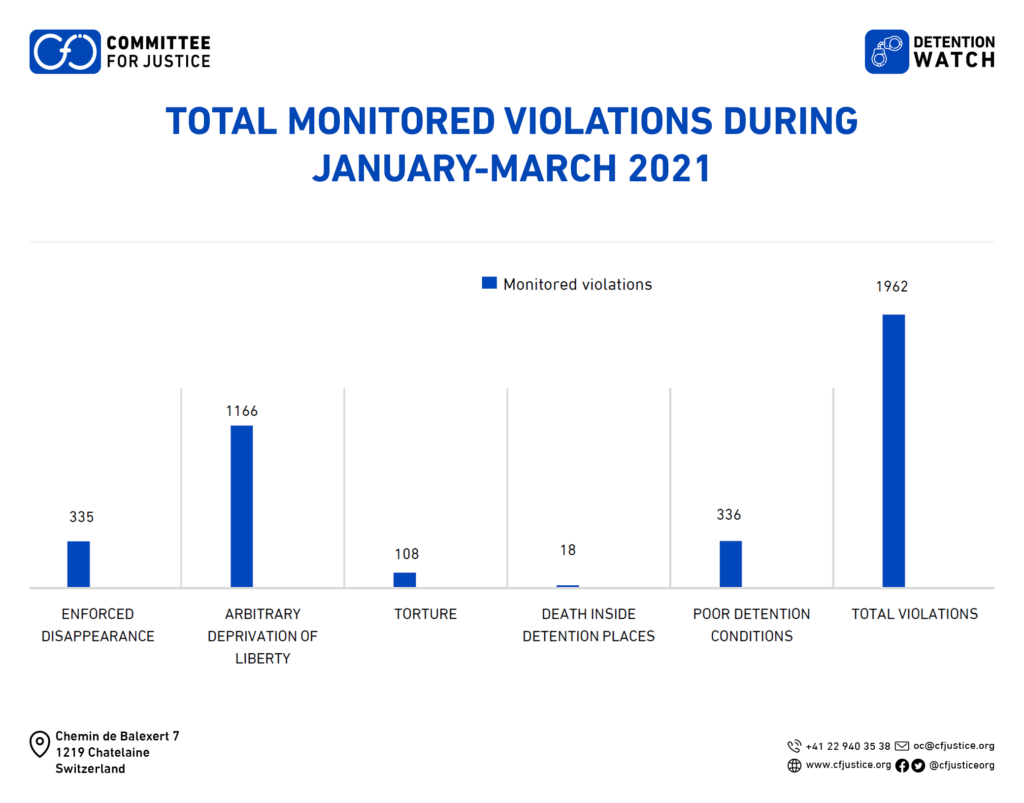 ِWhen conducting analysis by the name of the detention place, CFJ’s monitoring team was able to monitor 37 locations where 616 violations occurred during the reporting period, led by the Dar Al-Salam Police Station, Sharqiyya Security Forces Camp, and Shebbein Al-Kom Prison

The organization said that its report also included an analysis of monitored and documented data according to age groups, professional groups, and an analysis of the litigating authorities that consider cases against victims and the legal status of those victims.

CFJ also mentioned in its report several examples of cases of torture and poor detention conditions that were documented and cases of renewed detention (recycling), including the case of the deceased AbdelRahman AbdelBasir, who was listed in 13 cases for the same charges during his detention.

In its report, CFJ indicated that, in an effort to redress these victims and to end the injustice committed against them, it submitted 32 complaints during the first quarter of 2021 to the various United Nations mechanisms to pressure the Egyptian authorities to stop or curb human rights violations. During the reporting period, our efforts resulted in the issuance of two legal opinions and the release of one of the victims or his family’s wish to close the complaint file.

At the conclusion of its periodic report, CFJ recommended abolishing the Emergency Law and all decisions issued pursuant to it and in conjunction with it, and applying the alternatives available in the penal code, as well as pressuring Egypt to apply Articles 14 and 15 of the International Covenant on Civil and Political Rights, concerning the right to a fair public trial before competent, independent and impartial courts,  and the elimination of the phenomenon of “recycling” defendants in cases with the same accusations in order to keep them in pretrial detention for prolonged periods without trial.

The organization also called for pressuring the Egyptian authorities to sign the Convention for the Protection of All Persons from Enforced Disappearance, to amend the legal provisions criminalizing torture, and to oblige judicial authorities to repeal provisions based on confessions obtained through torture, oblige security services to comply with the interrogation rules and to enable victims and their relatives to file complaints, preventing the perpetrators of these crimes from enjoying impunity, and opening the door to oversight on places of detention, particularly National Security headquarters and police stations, by civil society organizations and international bodies.