Assiut General Prison: Excessive Use of Force Against Political Detainees

Assiut General Prison: Excessive Use of Force Against Political Detainees

The Committee for Justice has documented serious violations, including beating, threating, and extended placement in solitary confinement, from 14 June 2017 onwards in Assiut General Prison against political detainees. more info here

In this report, we will go over the violations political detainees suffered in Assiut General prison from 14 June 2017 until now. This report is based on the Committee for Justice’s interviews of the detainees’ family members. All names have been removed to avoid retribution against the detainees.

Assiut General Prison was founded in 1901 and is located 400 kilometers South of Cairo, overlooking the Ibrahimiyah Canal. The prison consists of two buildings which hold about three thousand inmates and has an execution ward.

According to a detainee’s family, political detainees in one ward were calling on the guards to give medical attention to an old, ill detainee imprisoned with them. When the guards did not, some of the detainees yelled at the prison guards that they had no humanity. Tension increased and sometime later, a cellphone was found in the public area designated for defecating. The guards accused two detainees of being the owners of the cellphone and wanted to put them in solitary confinement. The detainees in the ward with them objected since there was no evidence that they were the owners of the cellphone and refused to hand them over. On 14 June 2017, the tension escalated, and it resulted in the prison’s security forces beating the detainees, firing tear gas canisters at them, stripping them of all their

belongings, setting dogs on them, separating 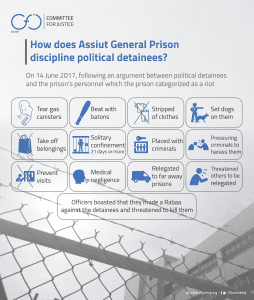 the detainees in different wards and placing them with detainees who committed criminal offences, pressuring detainees the latter to harass and assault the other detainees, placing them in solitary confinement, relegating some detainees to far away prisons and threatening to do the same to others and to kill them.

On Wednesday 14 June 2017, the detainees refused to allow the security forces inside their ward. This led to the forces firing tear gas canisters inside the small, overcrowded, and badly ventilated ward. When the detainees tried to get out of the ward, they were hit with batons all over their body. They set dogs on the detainees. Their clothes were stripped off of them leaving some in their underwear and others naked. CFJ spoke to a detainee’s family revealing that their relative was handcuffed, and then a member of the security forces tore his undershirt off him with a knife.

According to a detainee’s family whose relative was not in the downstairs wards where the attack took place but in a ward upstairs, the detainees upstairs could hear the screams of the detainees downstairs. They later learned that their hands were handcuffed behind their backs, stripped of their clothes, beaten, and made to crawl on their stomach.

Many of the detainees were then sent to solitary confinement for a supposed 21 days punishment. The families CFJ spoke to didn’t have relatives in solitary confinement, and due to the denial of visits, it is still unclear whether the detainees have been let out of solitary confinement after the 21 days passed, or if they are still in solitary confinement until now.  The rest were separated into different cells with detainees who committed criminal offences and are now moved to a different cell every 4 or 5 days. Those cells in the old building are unclean and have no area for defecating. The wards were also closed off, and detainees were not allowed to get out of it. A family with a relative in a cell with detainees who committed criminal offences told CFJ that even when the other detainees are allowed out of their cell, their relative is not as the other detainees fear that if they let him out, it will anger the prison administration. Thus, he is never allowed out of his cell.

This denial of visits also extended to not allowing the families to see the detainees while they were moved to and from the prison. The detainees were locked in their deportation car and not allowed out. This is unlike what used to happen before as they were allowed out and met their family while being transported.

On 27 June 2017, the ECRFEG released a short report revealing, based on their documentation effort, that the prison administration have relocated detainees to Manya and Fayum Prisons, without informing the families which detainees have been deported. While none of the families CFJ spoke to had their relatives relocated to Manya and Fayum Prisons, two families learned from their relatives that they were threatened to be transferred there.

During the families attempts to visit, no money, food, or medicine were allowed in the prison. It is important to note that several detainees already had medical problems before being detained that require medical attention, while other detainees suffered injuries during the assault, but none of them are granted the medical attention they need.

It is the prison administrations’ right and duty to preserve peace and security inside their prisons which will, at times, naturally require disciplining the detainees. However, they must respect the detainees’ human rights and the principles of necessity and proportionality.

The Assiut General Prison’s administration response to what they perceived as a riot was excessive and constitutes cruel and degrading treatment. Their response in the form of beating, threatening to kill the detainees, and extended solitary confinement contravenes articles 55 and 56 of the Egyptian constitution and the International Covenant on Civil and Political Rights, articles 7 and 10 that forbid actions inconsistent with human dignity and protect detainees against torture.

Recent modification of Egyptian domestic laws that govern prisons have been criticized for being cruel and violating both the Egyptian constitution and international instruments ratified by Egypt as they, among other things, effectively allow solitary confinement for up to 6 months. However, the punishments handed down by the Assiut General Prison’s administration in the form of solitary confinement for more than 15 days still violate domestic Egyptian laws as the law requires that the detainee’s statements and defense are collected and filed in a report first.

The committee for Justice calls upon the General Attorney and other relevant Egyptian authorities to investigate what occurred in Assiut General Prison. The committee for Justice also calls upon Assuit General Prison’s administration to respect their detainees’ human rights and dignity, return detainees still in solitary confinement to normal cells, and place all their detainees in adequate detention facilities.

Life after prison in Egypt: Integration or permanent alienation