Osama Albashbishi: Journalist Arrested on the Job Suffers from Torture and Medical Negligence

Osama Albashbishi: Journalist Arrested on the Job Suffers from Torture and Medical Negligence

Osama Jaber Mohammed Abdul Salam Albashbishi is a journalist who was arrested on 26 September 2016 while filming interviews with the public and has still not been tried. After his arrest, he was tortured and faces medical negligence in Lyman Tora Prison where he is currently held. 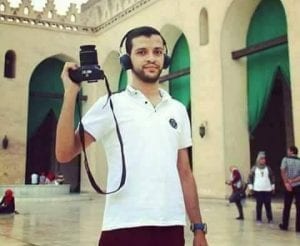 Mr. Albashbishi was arrested on 26 September 2016 by the police and investigative forces in the area surrounding Tahrir square, next to the Journalist Syndicate. He, along with Hamdy Mokhtar and Mohamed Hassan were filming an investigative report on high prices on the street when they were arrested without any warrant being presented or any explanation given to them. Since September 2016 till now, Mr. Albashbishi has remained in pretrial detention.

The other journalist who was arrested with Mr. Albashbishi, Mr. Mokhtar, also suffers from medical negligence. Read here on Hamdy Mokhtar. Following his arrest, he was tortured, which led to a considerable deterioration of his health, as he had two heart attacks in the span of 4 months, he became diabetic, and was nearly amputated of his leg.

After the three men were arrested, they were taken to Qasr El Nil Police Station. While Mr. Albashbishi was there, unidentified men hit him with the back of their rifles, shoes, and fists. He was also shocked with electricity in sensitive areas. He could not identify the men or to which forces they belonged to, as he was blindfolded throughout the torture. The aim of the torture was to get him to confess, but he did not. While his lawyer failed to put the torture incident on the records during investigation, he succeeded in proving it during Mr. Albashbishi’s renewals for his pretrial detention.  However, no investigation has been opened into the torture instance.

Before Mr. Albashbishi’s arrest, he suffered from a severely weak eyesight and had to wear eyeglasses to preserve his remaining eyesight.  On the days following his arrest on 26 September 2016, the men imprisoning him broke his glasses.  Since then, he wasn’t allowed an eye examination in Qasr EL Nil Police Station or Lyman Tora Prison to get new fitted glasses. This led to his eye suffering from inflammation/infection and near constant headache. His lawyer filed requests to the prosecution and Prisons Service to allow him to be examined with no results. His eye inflammation/infection was also left untreated by the prison which led a doctor imprisoned with him to examine his eye and recommend him a medicine. The medicine only treated the inflammation/infection for a short while before it returned again. Consequently, the family had no choice but to send him on 15 June 2017 unfitted glasses based on an old eye examination which may cause more harm to his eyesight.

He is also kept in unsanitary detention conditions that harm his health. For instance, in May 2017, 16 of the detainees, including Mr. Albashbishi, got food poisoning and that compounded by malnutrition led to a high fever and diarrhea. The Lyman Tora Prison administration refused to send them to the Prison’s hospital and only attempted to treat them the next day.

Since his arrest in September 2016 till now, Mr. Albashibishi has been held in pretrial detention on charges relating directly to his job as a journalist such as spreading false news and promoting the brotherhood’s ideas along with protesting and belonging to a banned organization.  It is important to note that Mr. Albashbishi is not the only imprisoned journalist as the Committee to Protect Journalist listed Egypt as the third worst offender in imprisoning journalist in 2016. This is in clear violation to Egypt’s constitution that forbids prison terms for press crimes in Article.71 as well as Article. 19 of the International Covenant on Civil and Political Rights. Egypt’s vague counter terrorism laws that led to the imprisonment of many journalists also contravenes article.19 of the ICCPR. In General Comment 34, the UN Human Rights Committee interpreting article 19 stated that “Such offences as “encouragement of terrorism” and “extremist activity” as well as offences of “praising”, “glorifying”, or “justifying” terrorism, should be clearly defined to ensure that they do not lead to unnecessary or disproportionate interference with freedom of expression […] In this regard, journalists should not be penalized for carrying out their legitimate activities.”

Egyptian authorities must also provide Mr. Albashbishi with adequate healthcare and detention conditions. The Egyptian constitution guarantees the right to health to every citizen in article 18. In article 56, the constitution affirms that a prison is a place of correction and rehabilitation and that actions inconsistent with human dignity or which endanger human health shall be prohibited. In general comment no.14 on article 12 of the International Covenant on Economic, Social and Cultural Rights, which Egypt ratified, it stated that “States are under the obligation to respect the right to health by refraining from denying or limiting equal access for all persons, including prisoners or detainees.”