Annual report: Egypt in 2020 was torn between intensified repression and the Covid-19 pandemic

In its annual report about conditions of detainees in Egypt, the Committee for Justice (CFJ) holds Egyptian authorities fully responsible for the human rights violations that have occurred inside their official and unofficial detention centres in the year 2020, based on the provisions of the Egyptian constitution and criminal law, as well as international human rights treaties that Cairo has signed.

CFJ stated today that its report aims to inform the local and international authorities concerned with conditions of detention in Egyptian prisons and detention centres, as well as raise awareness of patterns of administrative practices and decisions that represent successive violations of detainees’ rights, and also to demand the Egyptian authorities’ engagement in a dialogue that would build coherent and consistent strategies and laws to stop and end those violations.

Extending the State of Emergency and Covid-19:

The report indicated that the Egyptian regime initiated 2020 with the extension of the State of Emergency throughout the country for a period of three months. The report also discussed the consequences of the Covid-19 pandemic on detainees who had already been suffering from poor conditions of detention. More than ten detainees have died inside detention facilities as a result of poor health care before the spread of the pandemic, in addition to the use of the pandemic by the authorities as a new weapon to abuse detainees. An initial ban on family visits was declared between March 10 until March 19 as a precaution to confront the pandemic; then, the ban was extended many times until it became in effect for an indefinite period. Nevertheless, the pandemic has spread among detainees due to overcrowded cells, poor ventilation, and the difficulty in accessing water, food and hygiene materials.

Continued repression of all segments of society:

The report also indicated the escalation of repression by the Egyptian regime against its opponents, especially media professionals, researchers and human rights defenders. The most prominent case was what happened with the human rights defender and director of the Cairo Center for Human Rights Studies, Bahey El-Din Hassan, and the 15-year prison sentence issued against him in absentia. The second most well-publicised case was the crackdown on staff members of the Egyptian Initiative for Personal Rights, who were arrested then released in early December 2020 after a high-profile international campaign against their arrest.

The report also sheds light on the Egyptian authorities’ abuse of all segments and of society without discrimination. Hundreds of thousands of citizens were transferred to exceptional trials in conjunction with the implementation of the instructions of President Abdel Fattah El-Sisi to remove unlicensed homes and buildings, a measure that led to the removal of more than 36 thousand different buildings from the end of March to the beginning of July. The demolitions sparked rare popular protests in September, which prompted the regime to embark on another wave of crackdown against the opposition.

The report also addressed the government’s brutality in carrying out death sentences against opponents. On one day, February 24, Egyptian authorities executed eight individuals after convicting them of the bombing of churches in Alexandria in 2017, and in October, the government executed two individuals in connection with the same case, known as the Library of Alexandria incidents, in addition to the execution of 13 people accused of political violence.

Violations in 2020: figures and facts: 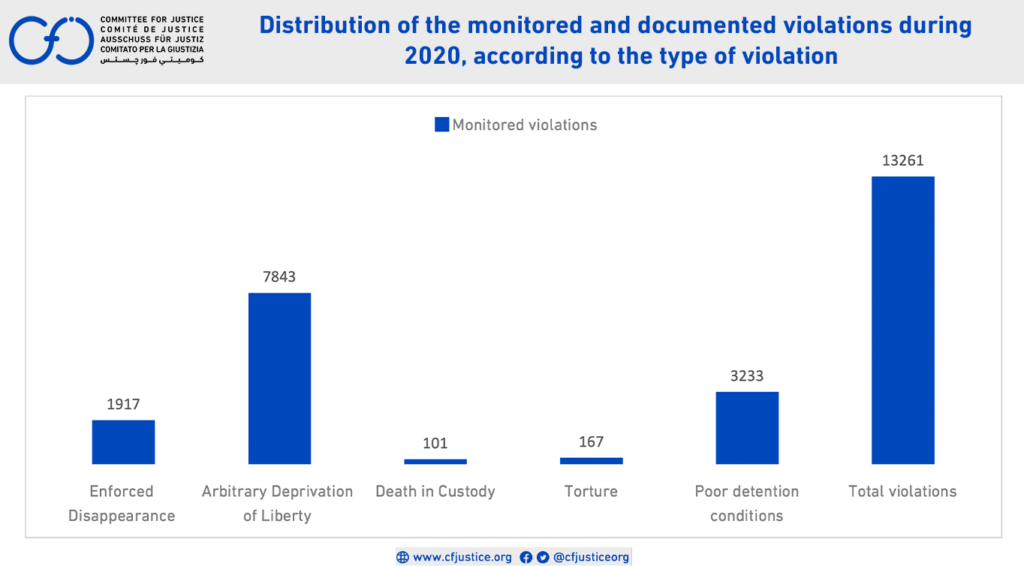 The CFJ report reviewed the violations that the organisation monitored during the year 2020, which totalled 13,261 violations, in 153 prisons and detention centres, against 7,616 individuals. The largest number of monitored violations were: arbitrary deprivation of liberty – by about 59 per cent (7843/13261), poor conditions of detention by about 24 per cent (3233/13261), and enforced disappearance by 14 per cent (1917/13261). The report indicated that the organisation was able to document about 8 per cent of the total monitored violations (1120/13261) that targeted 101 individuals.

The student group was subjected to most violations, with 285 monitored violations and 101 documented ones. From the list of investigative bodies that hear the cases on which the victims of violations are listed, the victims whose cases are heard by the Supreme State Security Prosecution recorded 45 per cent (6088/13261), while 8,674 violations occurred against victims of pretrial detention, with about 65 per cent (8674/13261) of the total violations.

CFJ has succeeded in monitoring 1917 incidents of enforced disappearance; 155 of them have been documented. September witnessed the largest number of violations, accounting for approximately 23 per cent of the total (1917/451).

Among the violations of poor conditions of detention, the report was able to monitor 3233 violations, which included 1930 violations related to the ill-treatment of detainees/prisoners, 1242 cases of denial of health care, and 61 cases of punitive expulsion to a distant detention facility. Concerning documented data, CFJ – through communicating with the families of the victims – was able to document 623 cases of poor detention conditions, which were divided between 397 violations of ill-treatment, 206 denials of health care, and finally, 20 cases of expulsion.

The report pointed out the measures provided by CFJ in support of the victims of these violations, the most important of which was the filing of 85 UN complaints dealing with six main types of violations: arbitrary detention, enforced disappearance, torture, extrajudicial killing, denial of health care and retaliation against the victims and their families.

The work of the complaints team also benefited 260 victims during the year 2020, distributed among 257 males and three females. During the reporting period, and including complaints submitted in previous periods, the number of complaints accepted by the concerned authorities reached 73 complaints.

In addition, the number of outcomes reached by CFJ by filing complaints reached 45 results, of which the results of finding the places of the disappearance of victims of enforced disappearance were the highest, with 25 results, followed by the issuance of legal opinions by the UN authorities, with 16 results during the year 2020.