Warning: set_time_limit() has been disabled for security reasons in /home/clients/cfc9ccbde4e3c4fd6b03146d9644ccb8/Beta/wp-content/themes/themify-ultra/themify/cache/class-themify-cache.php on line 87 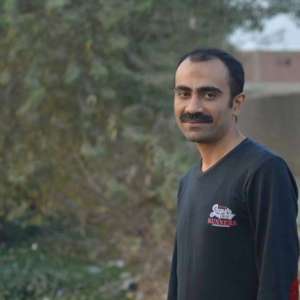 The Committee for Justice calls upon Egyptian authorities to grant Hamdy Mokhter Ali Mohamed justice, proper care and treatment. Hamdy Mokhter Ali Mohamed is a journalist who was arrested while on a work assignment. Following his arrest, he was tortured, which led to a considerable deterioration of his health, as he had two heart attacks in the span of 4 months, he became diabetic, and was nearly amputated of his leg.

“what you go through in prison really cannot be mentioned. It truly is a grave for the living.”

“We used to joke that the crime was possessing a camera, but now it is true.” (Read Hamdy Mokhtar’s personal letters)

Hamdy Mokhtar was arrested without any warrant on 26 September 2016 as he was filming a series of interviews with the public in front of the Journalists Syndicate.  There were no protests or sit-ins near the Journalists Syndicate that day, it was a simple work assignment. Officers stopped Mr. Mokhtar and asked him to come with them for questions. When the deputy of the Journalists Syndicate at the time “Khaled Al Balashi” and others who witnessed the arrest tried to intervene, they were told that they would only question him for half an hour, and that they would let him go right after that. However, since September 2016 till now, Mr. Mokhtar remains in pre-trial detention.

For the two days following his arrest, Mr. Mokhtar was punched, kicked, shocked with electricity, and burned with cigarettes all over his body in Qasr El Nil Police Station. The officers wanted him to confess on crimes committed by other people, but he maintained throughout the torture that he did not know the people they referred to. Mr. Mokhtar’s lawyer managed to convince the Zeinhum Prosecution to have his injuries resulting from the torture examined and assessed by a forensic doctor.  According to the detainee himself, the forensics doctor told him that he documented seven injuries on him, including fractured teeth, dislocated shoulder, bruises on his body and face, burning marks from cigarettes and electricity. Neither the detainee, his family, nor his lawyer were allowed to view the forensic report conclusions on his injuries and no steps were taken by the prosecution or court to investigate these torture allegations.

On top of physical torture, Mr. Mokhtar was also subjected to psychological torture, as officers in Qasr El Nil Police Station threatened him to hurt his wife and children. A few days after his first appearance before the prosecution on 28 September 2016, the detainee got his first stroke. It was his lawyer who happened to be in the police station who called an ambulance. The officers in the police station refused to allow the ambulance to take the detainee to a hospital, but a doctor was allowed to examine the detainee as the station had no doctors or medical equipment despite being used as a detention facility. The doctor concluded that the stroke was a result of being put under extreme stress. Strokes are rare for people under 45 years old. Hamdy Mokhtar is only 38 years old, and he already suffered two strokes in four months.

On 26 October 2016, the detainee was moved to Investigation Tora Prison. On the day of his arrival, he was subjected to the “welcome party”, torture method in which the prison personnel stand in two lines and beat and kick the detainees as they try to walk between them. Then, Mr. Mokhtar was placed in solitary confinement for 15 days, his clothes were all torn, and his hair cut off. When the detainee asked the prison administration why they were punishing him when he had just arrived, they replied that it was simply their way of treating newcomers.

The 38 years old Hamdy Mokhtar had his second stroke in January 2017 during a visit of his family. His family reported how he suddenly couldn’t talk or move his arm. He currently can’t walk on his right leg as a result of his strokes, nonetheless, he was never properly examined by a specialized doctor to determine the origin of his strokes. On top of that, he has also been diagnosed with diabetes during his imprisonment.

Recently, his leg got injured but instead of being treated, Mr. Mokhtar just received painkillers. The leg got infected and started rotting. Fearing that it may lead to amputation, a doctor imprisoned with the detainee ended up cleaning the wound and cutting it with a razor and then disinfecting it with honey.

No attempts have been made to improve his living condition in detention, though it may have put him under extreme stress, causing him two strokes. Neither the detainee, nor the family were allowed to view medical reports on his condition as he has only been examined by the prison’s doctors.

Hamdy Mokhtar, like other imprisoned journalist and bloggers, is charged with publishing false news, as well as videotaping without permission, and not having his ID.  It is important to note that Egypt reached third place for biggest number of imprisoned journalist in the world in 2016, according to the Committee to Protect Journalist. It is difficult to separate the fact that Hamdy Mokhtar was arrested while working as a journalist from the hostile attitude of Egyptian authorities towards journalists that caused the country to place third.

The Committee for Justice urges the Journalist Syndicate and the relevant prosecution and Courts to investigate the torture allegations, and provide the detainee with proper medical attention and treatment.